The Need for Bio Jet Fuel

Today global international aviation emissions are 70% higher than in 2005 and the International Civil Aviation Organization (ICAO) forecasts that by 2050 these could grow by a further 300-700%. 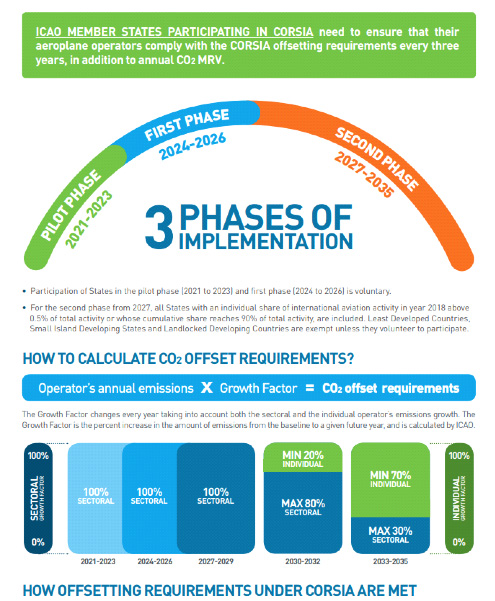 The image explains the scheme which should be completed by 2035.

Under the agreement, the global aviation emissions target is a 50% reduction by 2050 relative to 2005.

To achieve this goal approximately 100 million-ton SAF per year would be needed at today’s global jet fuel consumption but less than 0.1 percent of this volume is produced today.

The products of jet fuel combustion

Similar to any pure hydrocarbon fuel, when pure jet fuel is burned under ideal conditions (with pure oxygen), its combustion by-products are carbon dioxide and water. In real world applications (less than ideal, and in the presence of air, which contains nitrogen) the combustion may also result in the trace release of carbon monoxide, unburned hydrocarbons (in gas and particulate form), oxides of nitrogen, and oxides of sulfur (as a direct function of how much sulfur is in the fuel).

Regulations exist that limit the amount of pollutants that can be produced. Jet fuel combustion produces ~3.16 pounds of CO2 per pound of fuel burned. These pollutants will need to be reduced.

The difference between jet fuel and automotive fuel

Automotive fuels are produced to their own unique specifications. Jet fuel is generally produced to tighter specifications than gasoline or diesel (e.g. to guarantee operability, eliminate contaminants, etc.). That is why jet fuel needs an industry specific solution.